The First Level: The Drawing Itself

The Shape that determines the Consonants

The highlighted statement clearly stated that is a " " , as in it is a religious law* based on the fact that the people at the time believed it to be (but not all the people-according to the same paragraph). So in simple words, no matter what evidence one presents you still have to believe the Quran is unchanged from the Othmani Version that was officially adopted by the government at the time that was later on overthrown by a rebellion. And the reasons they list are:

*Religious Law, is a law that if broken you are no longer considered a follower of that religion or in this case Islam.

**the ten accepted readings are the officially accepted different readings of the Quran where the words are read and pronounced differently.

I know you're probably thinking "But doesn't that make a huge difference in the Arabic Language", well...True, but what's a vowel or two (or TEN!) among friends. Right?

The Second Level: The Vowels

The Marks that determines the vowel after each consonant.

The Third Level: The Points 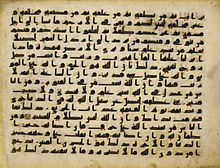 The 10 different ways to pronounce the words correctly

Narrated Anas bin Malik:
Hudhaifa bin Al-Yaman came to Uthman at the time when the people of Sham and the people of Iraq were Waging war to conquer Arminya and Adharbijan. Hudhaifa was afraid of their (the people of Sham and Iraq) differences in the recitation of the Qur'an, so he said to 'Uthman, "O chief of the Believers! Save this nation before they differ about the Book (Quran) as Jews and the Christians did before." So 'Uthman sent a message to Hafsa saying, "Send us the manuscripts of the Qur'an so that we may compile the Qur'anic materials in perfect copies and return the manuscripts to you." Hafsa sent it to 'Uthman. 'Uthman then ordered Zaid bin Thabit, 'Abdullah bin AzZubair, Said bin Al-As and 'AbdurRahman bin Harith bin Hisham to rewrite the manuscripts in perfect copies. 'Uthman said to the three Quraishi men, "In case you disagree with Zaid bin Thabit on any point in the Qur'an, then write it in the dialect of Quraish, the Qur'an was revealed in their tongue." They did so, and when they had written many copies, 'Uthman returned the original manuscripts to Hafsa. 'Uthman sent to every Muslim province one copy of what they had copied, and ordered that all the other Qur'anic materials, whether written in fragmentary manuscripts or whole copies, be burnt. Said bin Thabit added, "A Verse from Surat Ahzab was missed by me when we copied the Qur'an and I used to hear Allah's Apostle reciting it. So we searched for it and found it with Khuzaima bin Thabit Al-Ansari. (That Verse was): 'Among the Believers are men who have been true in their covenant with Allah.' (33.23)

(5) - Said ibn Thabet was chosen for the task, he carefully compared his text with the one held by Hafsa

(10) - Early was written in a scripta defectiva not pointed and not signed which make distinguishing letters difficult.

(13) - Some of the other reading are: 1. Nafi of Medina according to Warsh and Qalun

(14) - 2. Ibn Kathir of Mecca according to al-Bazzi and Qunbul 3. Ibn Amir of Damascus according to Hisham and Ibn Dakwan

(17) - Those were the major surviving version of the Quran

(20) - Al-Hajjaj Ibn Yusuf changed several words in Uthman's version of the Quran here's some of those changes :

(21) - As a conclusion the claim that quran wasn't altered couldn't be further from the truth. It shows the ignorance of its holders